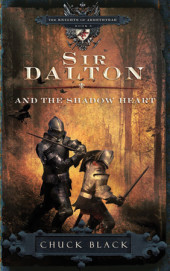 Sir Dalton and the Shadow Heart
by Chuck Black

To be honest, I didn’t think I would like this book. I don’t read a lot of fiction anymore, and this is specifically a “Youth Fiction” book. To some extent, I thought some of the characters’ names were a little cheesy. ivermectin cousin horse Jesus became “Sejus”; Lucifer (the Dark Lord) became “Lucius”. (But, again, this is youth fiction. Even though I decoded it quickly, my son didn’t see it until I pointed it out. anitta ivermectina That’s the point.)

But not all were like that. In fact, Black did a great job with the name of the main character’s enemy – Skia ek Distazo. It’s Greek for…well, you figure it out yourself.

The story is good – about a young Knight of the Prince who has to face his demons before becoming who he was designed to be. It’s a great place to start for spiritual discussions with kids – it even has built-in discussion starters and questions in the back!

So, since my review is not exactly from the perspective of a kid, I thought I’d let you know what my oldest boys thought.

I liked the book. It was pretty cool. What I liked best was how they wrote the book. They used good vocabulary. The battles were the coolest part.

My favorite part was when Sir Dalton was battling his enemy, Skia ek Distazo (aka Lord Drox). There was one particular part that I liked about it. You see, Skia ek Distazo has Death Ravens (ravens with four wings). He motioned for one of the Ravens to dive at Dalton. Earlier he had ducked when this happened, but this time he didn’t because he knew what was going to happen. Instead of falling for it again, this time he… (Yeah, right! Read it for yourself!)

I would recommend it for anyone who likes battles and knights and castles.

I didn’t really want to read it, but when I got into it, I felt like I was actually in the book. I totally liked the four-winged raven and the hounds.

At one point during a battle in a cave, I thought, “If I was going to fight someone, I wouldn’t go into a cave to do it. how fast does oral ivermectin work ” My favorite part was when Drox and Dalton were fighting.

Sir Dalton and the Shadow Heart is available directly from Random House here or from Amazon here.